Less than a month after my first practice run to visit my family and to test the effectiveness of my systems and my plan, I was able to set off on my first real motorcycle road trip.  It was April of 2009.  I had been retired for all of four months.

At the Blue Ridge Motorcycle Campground in Cruso, NC

As it happened, a friend and former colleague at CNN, whom I hadn’t seen in nearly four years, was headed my way from Ohio.  I had stayed in contact with Bryan Cady through his page on the social website, Facebook.  And it was, in fact, he who had originally planted in my psyche the seed of motorcycling as an achievable and adventurous undertaking.
Bryan is a veteran biker, despite being decades younger than I am, but he was never one to proselytize for the pastime; he simply spoke fondly and with passion of his trips to fascinating places.  He and his single-cylinder bit of German engineering genius have scaled Pikes Peak and suffered the inferno of Death Valley.  They’ve slept under the towering buttes of the west and on the shores of Fundy. Bryan rode each of the 50,000 miles recorded on his BMW’s odometer, and he is at home on his Beemer in the same way that I am in my Lazy Boy.

I was honored by Bryan’s invitation to join him– and other BMW “thumper jockeys”– at a gathering of the faithful in the mountains of North Carolina.  I should make it clear, though, that Bryan and I had been discussing this ride for some weeks.  And it was he who insisted that I get the experience of at least one solo trip before joining other cyclists on the road.  The lessons and distractions of that first endeavor proved the wisdom of his guidance.

CHANGE OF PLANS-
Originally, Bryan and I had planned to link up in Knoxville– just about equally distanced from my home in Georgia and his in Ohio.  We were going to meet at a campground, spend the night, and then he could lead me through the early curves and turns of the Great Smoky Mountains.  Well, The Weather Channel had other ideas.  It rained heavily and consistently for days before and right on through our planned date to depart for Knoxville.  In order to make his rendezvous with his sport bike friends, Bryan had to leave Ohio in the rain and make fast tracks for the meeting.  I had no intention of riding in the rain– especially not into mountains for the first time.  We agreed that I would come to the rally on its second day… after the rain had stopped.

A visit past due.

That turned out to be a good plan.  It gave Bryan a day and a half of free time with his biker buddies without having to play host to the new guy.  And it gave me an opportuinty to approach the North Carolina rally at my own pace in glorious spring weather and by a route that took me past my father’s hometown and his burial site.
I don’t know what my dad might have thought of this post-retirement facination of mine.  He’s been dead for more than half of my life.  He never knew of my career achievements or my sailing across the Atlantic.  He wasn’t one, himself, to pursue pointless avocations.  A career military officer, he tended to focus on the immediate objective.  But I rode my Black Beauty to the rural mountainside where we had laid him to rest so long ago, and I told him of the major events in my life… and how just getting there had been one of them, on coiled and curling roads that groped for altitude as they climbed steeply out of Georgia and toward the Blue Ridge.

No cars or RVs allowed.

I camped not far from the cemetery, near Rosman, NC, and the following day I hooked up with Bryan at the quite hospitable Blue Ridge Motorcycle Campground in Cruso.  Bryan’s group made me feel welcome and comfortable.  Yet I wondered why none of them commented on my status as a nearly ancient member of the biking community.  The next day I discovered the reason for their indifference. 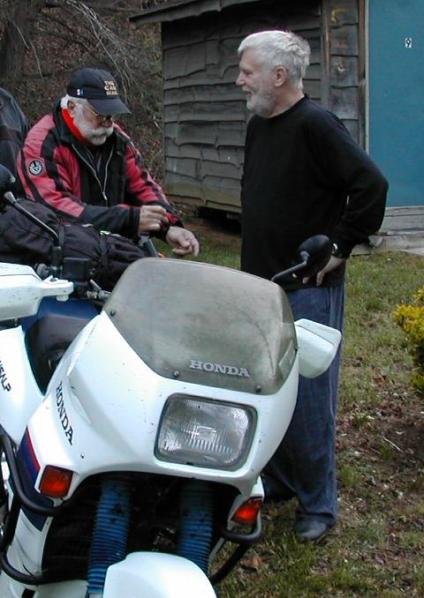 I had expected– at age 67– to be remarked as the oldest rider in camp.  That was before I was introduced to Ike Maxwell.  Ike was a hearty and fit 79 years old on that April morning in 2009.  And he had plans in the next few months to celebrate his 80th birthday by riding his Honda sport bike across the country (east to west) on U.S. Route 80, and back again (west to east) on Interstate 80… Georgia to California to New York.

Just getting to the rendezvous campground had been an almost terrifying learning adventure for me.  Because of our change in schedule and my failure to meet up with Bryan in Knoxville, I had missed out on the early guidance and training I had expected to get from him.  Forced to ride solo, each new curve and twist and switchback offered its own lesson in downshifting, throttle control, clutch manipulation, and the ever precarious effort to balance a heavily loaded bike.  And that added up to hundreds of lessons in my two days alone.  But there was an upside: I now had little trouble keeping up with Bryan when the BMW rally was over and we struck out on our Smoky Mountains tour.  Not that he ever really put me to the test.  But when he suggested I take the lead for awhile, I felt an undeniable surge of pride and satisfaction. 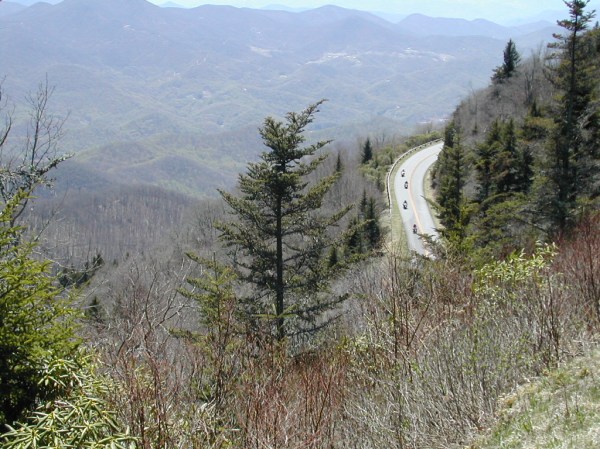 We headed back the way we had planned to come– along the Blue Ridge Parkway and back toward Knoxville, eventually passing through Cherokee and Pigeon Forge.  We took a winding side trip to the highest point in the Smokies, and we camped along cold and clear streams of rushing mountain water.

I had finally joined the legions of men and women who take to the road for renewal and release, and I was sharing in those rewards.